Steam
GameJolt
Ultimate Custom Night, often abbreviated UCN, is the eighth installment in the Five Nights At Freddy's franchise, and the successor of Freddy Fazbear's Pizzeria Simulator. It is by some considered FFPS's Custom Night, even though it is its own independent game, having a Steam page.

It was released on June 27th, 2018 on Steam and Game Jolt. A fake demo was published on the latter on the 21st of June, which featured the full character selection menu, but no actual gameplay, excluding the troll shooting game.

Welcome to the ultimate FNAF mashup, where you will once again be trapped alone in an office fending off killer animatronics! Featuring 50 selectable animatronic characters spanning seven Five Nights at Freddy's games, the options for customization are nearly endless. Mix and match any assortment of characters that you like, set their difficulty from 0-20, then jump right into the action! From your office desk, you will need to manage two side doors, two vents, as well as two air hoses, all of which lead directly into your office.

This time you will have to master other tools as well if you want to complete the ultimate challenges, tools such as the heater, A/C, a global music box, a power generator, and more. As if all of that weren't enough, you'll also need to set up laser traps in the vents, collect Faz-Coins, purchase items from the prize counter, and as always, keep a close eye on not one, but two, Pirate Cove curtains!

There are also other buttons, such as the challenges, which allows you to select a pre-made combination of animatronics and their difficulties, the power-ups, which give you a boost in the following night, and the offices, giving you four different offices to play in, the first one being unlocked from the start and the other three unlocked by different high-score values. Lastly, there's a checkbox which toggles characters' decriptions on and off.

UCN features a wide range of different mechanics; all of which have to be mastered in order to beat 50/20 mode. Some mechanics are returning from other games, while others are exclusive to UCN.

At the end of some nights you will randomly receive one of four different power-ups. These last one night only and you can select any number of them per night. Once you win or lose any night with power-ups active, those power-ups are consumed and can only be used if you have more of them.

UCN's artwork in its Steam page.

UCN's first teaser, containing 40 empty spots, which reveals it was originally planned to have 40 selectable animatronics instead of 50.

Teaser containing the first twenty characters, including Endo-01, which was later replaced by Nightmare Bonnie.

Teaser with 38 characters. Golden Freddy and the Marionette were added.

Teaser with 39 characters. Lefty was added.

Teaser with all the 40 spots full. Phone guy was added.

Candy Cadet and Endo-01's spots are replaced with static.

The trash gang has been merged into one spot; Nightmarionne and Molten Freddy were added.

4 more spots were added, and, with them, Nightmare BB, Helpy, Phantom Freddy and Phantom Mangle. All the animatronics have been organized by their games.

Final character set. The rockstar animatronics have been added, as well as Phantom BB and Old Man Consequences. The full game title "Ultimate Custom Night" was revealed, and a general release date was, too.

Teaser which revealed one of UCN's offices.

All the extra characters (but Fredbear) were revealed.

Charecters (A W.I.P By John Miller And His Studio) 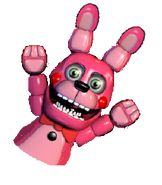 PURPLE GUY IS BACK IN UCN 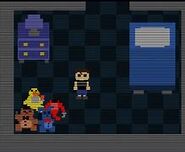