Foxy, fully known as Foxy the Pirate, is a damaged fox animatronic which was once part of Freddy Fazbear's band, but was later decomissioned. He is one of the selectable characters in Ultimate Custom Night.

He's one of the five original Five Nights at Freddy's characters, along with Freddy, Bonnie, Chica and Phone Guy.

He will gradually leave Pirate's Cove if you don't check on him regularly. Once he is out, he will enter your office piece by piece.

Foxy shares Pirate's Cove with Bonnie. Unlike the latter, when viewed by the camera, he will be slowed down, preventing him from sprinting into the player's office. If Foxy succeeds in getting out of Pirate's Cove, he will toss in his parts (head, arms, torso and legs) in the office, slowly building himself while the player flickers the monitor. Once Foxy has finished building himself, he will proceed to attack the player, ending the night.

Foxy's right arm, with the hook. 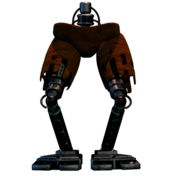